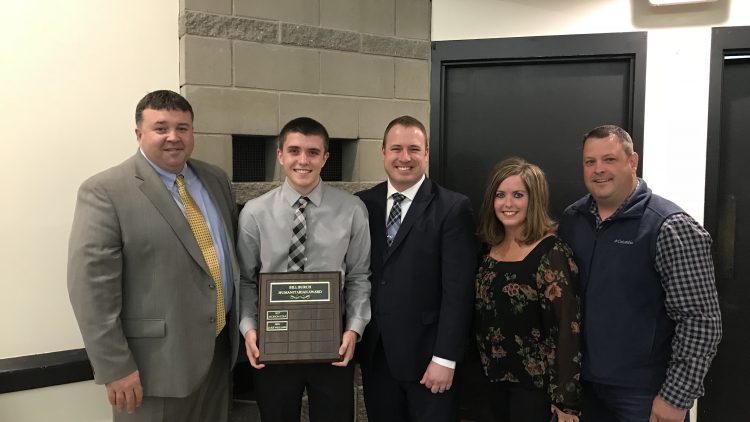 Luke can be described as compassionate, friendly, and respectful. He is an ambitious, thoughtful, and humble student who has worked hard to demonstrate leadership in the classroom, the playing field, and the community.  Luke will undoubtedly carry these same qualities into his post-secondary pursuits. His quiet leadership has been a strong example for his peers and teammates. Perhaps what is most impressive is that he does not seek out or expect recognition for doing good; it is simply something ingrained in and reflective of the great character he possesses.

Luke has participated in a host of activities throughout high school, including being a four-year representative on student council, a two-year member of Got Bounce, a four-year member of the RAMbassadors, and a two-year mentor in the Mentors in Violence Prevention group. In all of these activities, he has worked to effect positive change in our school’s climate. In addition to the above, Luke was also inducted into the National Honor Society, selected to attend the National Conference of Youth Leadership, and chosen as a member of the high school’s student activities leadership team. He has also excelled in multiple sports, earning academic and athletic honors and serving as captain of both the basketball and football teams as a senior. Despite this level of involvement and the time it requires, Luke has also found time to serve as a support for the youth tackle football program, make blankets for the less fortunate, and maintain an excellent academic record, often taking challenging, college-level coursework.

All of these accolades, involvements, and qualities make it clear as to why the high school faculty selected Southeast Polk Senior, Luke Williams for such an esteemed honor.

About the Bill Burch Award

Bill Burch was a school counselor at Southeast Polk High School from 1974 until 1992. The Bill Burch Scholarship and Recognition Breakfast was named after Mr. Burch in honor of his commitment to the students and adults of the Southeast Polk community. He was known as a man of compassion and integrity who took the time to relate to students and adults alike. The Bill Burch Humanitarian Award represents a long standing Southeast Polk tradition that dates back to 1993 and is presented to the student who best exemplifies his character, sincerity, and compassion toward others. What makes this award such an honor is that the Southeast Polk High School faculty selects the senior recipient who best represents Bill Burch’s personal qualities.